Hey kids… time to get impressive! Mr Butt here with the really really really really awesome video from that really really really really boring album! Pull on your super best pants! Grab hold tight and get ready to dance the best thing ever… butt style! BUTT! BUTT! BUTT! Another juiced up POGOGO SHOW vid colours the frame with that special shade of fun - so stinky. Get bouncing ready for the all out MR BUTT show! Also to pass the time in iso and keep the kiddos busy with fun things tune in to KRAFTS WITH KOKO on Mondays @ 1pm on Instagram and Facebook. Making Pogogo Show themed crafts, with everything from Mr Butt masks to party hats and rainbow fans. Let’s get crafty with maximum fun! Plus dancing! 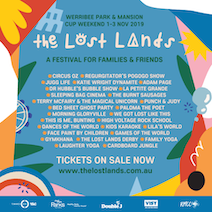 The Arts and Wonder program is brimming with surprising and wonderful performances. In the Big Top, Circus Oz will perform their acclaimed show Neon, a celebration of the gloriously gaudy and glitzy 80's. Regurgitator's Pogogo Show will bring the fun-time tunes. We've lined up the hilariously inventive Adam Page, master jugglers Jugg Life, the cheeky brilliance of Katie Wright Dynamite, a bunch of hilarious shows in La Petite Grande and heaps of other fun surprises.

The Lost Lands is the ultimate festival for big and little folk to share their love of music and art. Escape the ordinary into a natural wonderland and discover a magical world full of creativity and delight!

The Lost Lands is the brainchild of Simon and Mella, a husband and wife duo, who collectively founded and ran The Falls Music & Arts Festival for 20 years. After their second child six years ago, they moved on to other adventures. Inspired by long weekend campouts with their family and friends, they gave birth to a new festival - The Lost Lands! A magical experience, where families can dance, unleash their creativity and enjoy breathtaking performances together. They searched long and hard for the right location and found the perfect fit in Werribee Mansion, with its castle-like buildings, giant trees and lush gardens. Naturally evoking a sense of wonder and magic, it's the ideal place for people to relax and enjoy the festival nestled amongst a beautiful landscape. 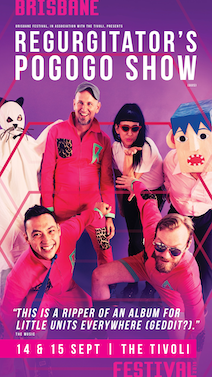 So we finally make the debut journey to Brisbane… not once, not twice… or thrice the fun!

Renowned Brisbane mash-up rock/electro/punk/poppin’ funtime outfit Regurgitator have cooked up a sugar-soaked record written especially for kids and are bringing it live to The Tivoli!

From the slinky hip-hop stylings of first single ‘The Box’ and the elastic hop-scotch energy of ‘Pogogo Show Theme’; to the punk rock mania of ‘Pillow Fight’ and tropicalia fun of ‘Corumbo’, it’s about as silly and cheeky as a record can get – and is sure to bring a smile to long-term fans and the tiny folk in their lives. 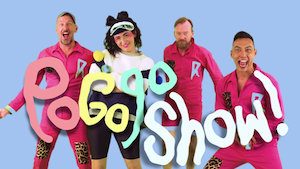 This new project sees longtime Regurgitator trio Ben Ely, Quan Yeomans and Pete Kostic joined by the effervescent Koko direct from Planet Rainbow. It’s already struck a chord with families around the country – with the album having quickly climbed to #1 on the Children’s iTunes chart.

The band’s wildly-varied jumping castle of sounds will come as no surprise to longtime fans. From the slinky hip-hop stylings of first single ‘The Box’ and the elastic hop-scotch energy of ‘Pogogo Show Theme’; to the punk rock mania of ‘Pillow Fight’ and tropicalia fun of ‘Corumbo’, young listeners will enjoy the spin of the musical wheel.

Of course, it’s all done with smiles all round, and with a certain feeling of destiny. As Ely observes: ‘‘Doing a kids album really feels true to our nature”.

And to add further colour and movement to the whole shebang, the band have today unveiled the madcap new video for ‘Pogogo Show Theme’, their irresistible mission statement tune. The release of the video also commemorates a significant Regurgitator milestone – arriving exactly 25 years after the band’s first ever gig in Brisbane. 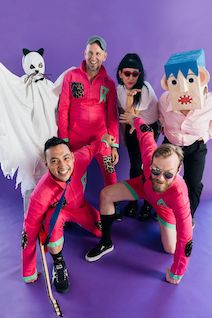 Having performed at a number of children's events in recent years, the inimitable band have developed the kids music project Regurgitator's Pogogo Show - a typically manic playground that careers between punk, hip-hop, funk, electro-pop and everything in between.

Featuring instant-ear wriggles such as first single ‘The Box', it's sure to bring a smile to the faces of long-term fans as well as the young ones in their life.

The band have never been more excited: “We've got our tiny amplifiers warmed up, our teeny drum kits tuned and plenty of soap for our filthy little mouths. We're ready to shout till our voices are wrecked, if you're ready to scream till your parents are deaf!”

Frontman Quan Yeomans explains the project's conception: "We had such a great time playing at Sydney's kids festival, 'Dress Up Attack!', in late 2013 that we came off stage so inspired there had to be a kid's album and show off the back of this. The first proper kids recording session was at Ben's house in 2014 or 2015. We took out the Teenage Engineering OP-1 a Bass guitar and a couple of mics and recorded a few tracks. We had such a laugh doing them we promised ourselves that we'd eventually get around to recording a full album. And finally, we got together with Peter and Koko in late 2018 and bashed it all out, warts, giggles and all!"

And also from the VALVE online store... 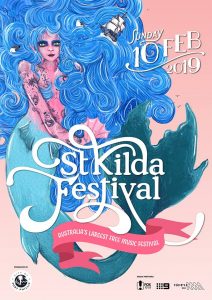 The Little Folks get a Second Dose of Syrup!

The little folks get a second dose of syrup… the POGOGO SHOW bounces on down to Melbourne to play an early afternoon slot on the main stage at the 2019 ST KILDA FESTIVAL. Yip pee!!!

SUN 10 FEB – ST KILDA FESTIVAL – free onstage
MAIN STAGE – 1.15pm
St Kilda Festival is a free celebration of community spirit, Australian music and the beautiful St Kilda foreshore. Since the first St Kilda Festival in 1980, this well-loved annual summer celebration has established itself as an iconic event that brings hundreds of thousands of people together for one massive day of fun! 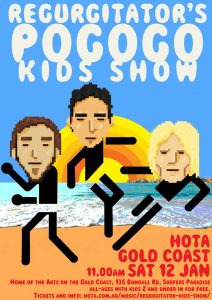 And Speaking of Dancing…

And speaking of dancing… the POGOGO SHOW is coming your way!
Finally the superspecial funball of a KIDS SHOW has found it’s fuzzy feet.
With a second performance of this new kids show heading to the Gold Coast… announced for HOTA, Home of the Arts on the Gold Coast, SAT 12 JAN 2019.
And the all new full length album along with a new partnership with the ABC… heading your way in early 2019.

Fire up the flippers, and put on your best dress-ups for their special g-rated punk-rockin’ kids tunes… let there be frock!

regurgitator’s POGOGO KIDS SHOW
SAT 12 JAN – HOTA. Arts Theatre
Home of the Arts on the Gold Coast,
135 Bundall Rd, Surfers Paradise QLD
11.00am – all-ages with kids 2 and under in for free.
Tickets and info here:
https://hota.com.au/music/regurgitator-kids-show/

A cool kids show by Brisbane’s quirky crew, Regurgitator. Bringing their witty, silly attitude and musical mash-up of funk, pop and rock, this unique collection of kids tunes is about as naughty as punk rock can get and still offer a G rating.

Have a little fun and come dressed up for this rockin’ performance made especially for young people and their adults.